How to improve Lubrication of the molds during your ceramic process

The pressing stage is one of the most demanding in the production of ceramic bodies. Therefore, gaining any improvements here is directly translated into savings along the production process. These improvements will help to optimize the total costs of the manufactured products by reducing losses whilst improving the quality of the shaped materials.

how plastic is your formulation?

One of the main differences between the ceramic bodies that can be manufactured through the pressing process is related to their plasticity. We can separate between “plastic” and “non-plastic”.

How can additives improve plasticity?

Basically, most additives are interacting with the surface of the different components of the formulas. Although it may not be a strong interaction it is  strong enough to enable those different materials to flow by reducing their inter-particular bonds. It can be seen in the following picture:

This effect allows formulations to behave in the same way as if the water share in the total formula was much higher. Therefore, we can say that these additives improve plasticity.

how is lubrication being improved?

The presence of Biopolymers on the surface of the particles in the formulation generates the same effect as if plasticity was improved, but without using any plastic raw material or any water addition.
When pressure is applied in the press, particles flow much easier  and  their apparent compaction values are much  higher when applying the same forces. Furthermore, there are some Biopolymers, also known as binders, in the market that allow particles to remain “bonded” when some pressure is applied which in turn helps to keep the facilities clean, as there is no particle release.
A secondary effect on the same particles is that, as long as they are not released, pressing moulds remain clean and the number of cleaning breaks  is also reduced, increasing the yield of the machine.

If we consider the potential existence of some products capable of acting both as binders and dispersants, we have the perfect solution for improving the pressing stage in the shaping process  within the Ceramic Industry. 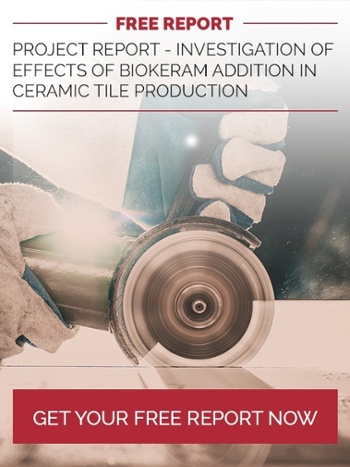